Hello everybody welcome to my blog about everything and everyone involving the new 2017 first person shooter game, that's right, Fortnite: Battle Royale! In Fortnite there are two basic modes: Battle Royale and Save the World. Battle Royale is like Minecraft and the Hunger Games put together.


In Battle Royale there are rounds you can play. Each round can hold up to 100 people. The game starts when you jump out of a flying bus called the BATTLE BUS. I know it sounds weird, right!? But it is a very important part of the game. While you are flying out of the bus you can pull out your glider so you can travel farther distances. After that, you must land somewhere to gather loot.


But there is a weapon you already start with at the beginning of the round. It is called a pickaxe or a harvesting tool. It takes away 10 health from a person out of 100 health, but it is also very useful for gathering materials. In Fortnite you can build structures with materials such as wood,brick, and metal.


The first thing to know about Fortnite: Battle Royale is unlike most games. You have to gather weapons at the beginning of the round, instead of already having them in your inventory. But this is not the case in Save The World mode. In Battle Royale you can play by yourself/solos, with one other person/duos or with 3-4 people/squads.


Usually in the game you will have 94-99 people playing against you. To win the round, you have to be the last one alive. Now you know the rules of Battle Royale, but now comes the fun part. 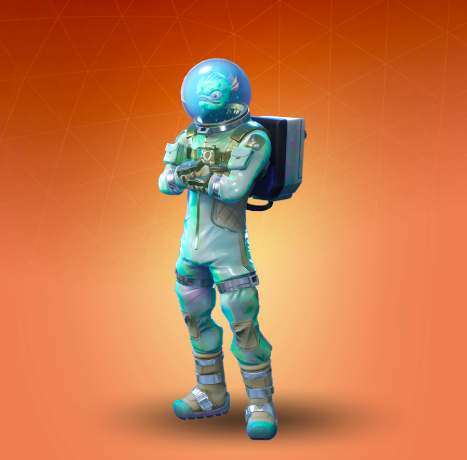 The Leviathan is in my opinion an very unique skin in the way that the fish head is bobbing around in his helmet. This skin also reminds me of the character from Megamind named Minion. The Back Bling of the Leviathan called the Fish Tank looks very cool on the character but on other characters it looks very bulky and big. This skin overall is very cool but I would definetly not get it just for the Back Bling.